Minister of Transportation, His Excellency, Rt Hon. Chibuike Amaechi, has advocated for more involvement in golfing which according to him, increases longevity and also provides an avenue for networking

The Minister said this on Saturday, after performing the grand opening and official tee-off of the 2021 Port Harcourt Club Amateur Open Golf championships.

The former Governor of Rivers also also commended the Port Harcourt Club for putting together the tournament, such that it attracted an array of golfers and dignitaries from across the country to the state while noting that the yearly event keeps getting better year-on-year.

“The Amateur Golf Open championship is something which the Port Harcourt Club, Golf section does annually. This years own, looking at the array of participants, showcases that it gets better every year”.

Amaechi, who is also a golfer, was represented by Engr Dr Chukwudi Dimkpa, President, Port Harcourt Polo Club, South South Zonal Chairman Karate Federation of Nigeria and Board Member Karate Federation of Nigeria, said golfing increases human life span and an avenue to connect people and businesses, enjoined participants to have fun and wish them a peaceful championship.

“They say golf is life, and being out here in this luscious green environment it’s something that adds a couple of more years to your life.

“So, it is an avenue of networking, to see the array of people here, dignitaries, golfers, people from all works of life… I think, all-in-all, it also gives Rivers State a sense of belonging because people can come in to town and go out of town all under sports.

The is competition organised by the Port Harcourt Club, Golf section, drew together an array of professional and amateur golfers from within the state and beyond.

According to the organizers, the event is aimed at grooming upcoming golfers to maturity and to showcase the sporting, investment and hospitality potentials of Rivers state. 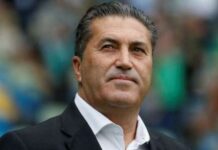