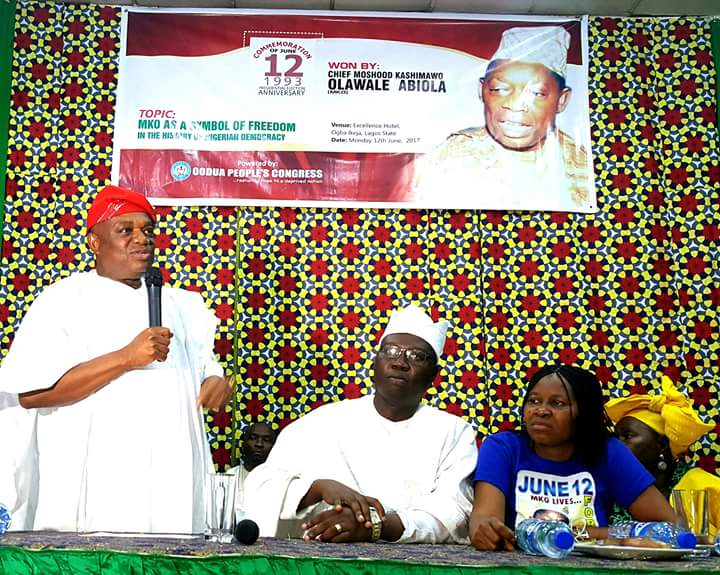 Former Governor of Abia State and a chieftain of the All Progressive Congress, Dr. Orji Uzor Kalu, MON, have congratulated President Muhammadu Buhari for declaring June 12th as democracy day in Nigeria.

Dr. Kalu in a statement revealed that he was the first governor to declare June 12th as a public holiday in Nigeria, when he was governor of Abia state, owing to the fact that June 12th 1993, was a day Nigerians came out to vote massively, putting aside their tribal differences.

Dr.  Kalu said, “Let me expressively congratulate President Buhari for heeding to the clarion calls of myself and other Nigerians over the years to declare June 12 as Democracy day. I also commend the concomitant recognition of Chief Moshood Kashimawo Olawale “Olanbiwoninu” Abiola as a former President of Nigeria with the highest award in the land as the Grand Commander of the Federal Republic (GCFR) and his running mate Ambassador Baba Gana Kinigbe also being invested with the award of GCON”.

“I deeply impressed that the awards was also extended to renowned human rights activist and fighter for the actualization for the June 12 elections in person of Chief Gani Fawehinmi SAN with his investiture as GCON.

“I have always been of the opinion that the spirit of June 12 is very much alive it was the more reason I decided to be the Ist Governor and public office holder in Nigeria to declare that day a public holiday in Nigeria, Abia State. This is because the events of June 12, 1993 means so much to me and many other patriotic Nigerians.

“It was a day Nigerians trooped out emasse and put aside their religious and tribal sentiments to express their mandate to choose their leader.

“The June 12 date is a precursor to the democracy the nation is enjoying and should have long been set aside as a symbol of fairness and equity.

“For 25 years Nigeria as country has always celebrated her democracy day on May 29th but the truth is without June 12 there wouldn’t have been a May 29th. This shows that the President recognizes the sacrifices of patriotic Nigerians for the actualization of June 12.
Yes! I am Igboman from Abia State but I declared that day a public holiday when I was Governor because it remains a remarkable day and unifying factor to every Nigerian which cuts across tribe and religious affiliation it symbolizes the promotion of positive ideals, national integrity and unity.

“Precisely last year at the annual June 12 Presidential Anniversary organized by the Oodua People’s Congress in Lagos I joined the voices of other patriotic Nigerians in calling on the Presidency to declare June 12 as the authentic Democracy Day and I am delighted that it has come to pass.
I must commend the President for his courage and taking such a bold and thoughtful decision where past leaders failed. He has remarkably demonstrated once again that he is a patriotic and detribalized leader dedicated to the unity and progress of the country.
I am strongly opinionated that the move will redress the injustice meted out to Chief MKO ABIOLA, his wife Alhaja Kudirat and also pacify the Southwest and Nigerians at large by the annulment of June 12 1993 Presidential elections and many others died in the cause of defending the mandate.

“It is very unfortunate a Former President Obasanjo one of the greatest beneficiaries of the June 12 who used the unfortunate events of the late MKO’s mandate to become President for 8 years made no single attempt to recognize the sacrifices laid. We remain thankful to the President for rectifying the anomaly by using his constitutional executive order to make the pronouncement I use this opportunity to call on all Nigerians to rally round the President and support him on his efforts in rebuilding the nation .

READ ALSO  EXPOSED: What politicians are doing to raise funds for their election

May the souls of Chief MKO Abiola and all others who died during the course of the struggle continue to rest in peace”.