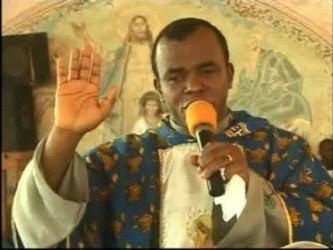 The Catholic Church has distanced itself from the Spiritual Director of the Adoration Ministry, Enugu, Rev. Fr. Ejike Mbaka, over his perceived politically charged statements.

In a video that has since gone viral, Mbaka was seen telling the vice presidential candidate of the Peoples Democratic Party, Peter Obi, during the annual harvest and bazaar celebration of the church on Sunday, that neither the PDP presidential candidate, Atiku Abubakar, nor President Muhammadu Buhari of the All Progressives Congress, would win the 2019 presidential election.

But the Director of Communications, Catholic Diocese of Enugu, Rev. Fr. Benjamin Achi, in an interview with The PUNCH, said the diocese was not in support of the cleric’s remarks.

When asked if Mbaka was still a member of the diocese, Achi said, “He is.”

He, however, noted that it was wrong for priests to make political statements from the pulpit.

Achi said, “The diocese is not in support of any priest making political statemen

READ ALSO  SGF Discloses When Buhari's Cabinet Will Be Ready

Achi said, “The diocese is not in support of any priest making political statements.

“The church is supposed to be apolitical and the Bishops’ conference has said that repeatedly.

“We are not supposed to make any political statements from the pulpit within the context of Mass, that is, church service.

“So, it would be wrong to stand at the pulpit to make any political statements.

“There is a document issued by the Bishops’ conference to that effect.

“So, he just spoke on his own, not representing the diocese.”

Achi noted that if necessary, disciplinary action against Mbaka would be carried out by the priest’s administrative head.