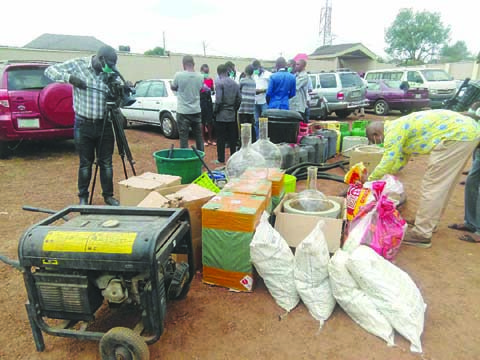 The National Drug Law Enforcement Agency, NDLEA, has warned over a possible outbreak of epidemic in Enugu State metropolis, following the contamination of major sources of domestic water by an illegal narcotics manufacturer in town.

The NDLEA gave the name of alleged South Africa- based illegal drug manufacturer as Christian Chibuzor. It said that the drug firm hidden in the residential area at Phase 6, Trans-Ekulu produced methamphetamine, an illicit hard drug, adding that the waste products from the factory had contaminated wells from where the residents of Trans- Ekulu sourced water for domestic use.

State NDLEA Commander, Adeyemi Adeofe, spoke on the contamination of the wells at Enugu State, while parading three suspected illicit drug manufacturers arrested from the illegal laboratory, adding that their arrest was based on credible information from two earlier suspects arrested with 100 kilogrammes of ephedrine.

Adeofe further said that due to the hazardous nature of the chemicals which had seeped into the wells and the underground water within the environment, the agency immediately dismantled the laboratory, “while the precursor materials and other dangerous chemicals used for production in the laboratory were seized,” to reduce the danger it posed to the society.

According to him, there was “urgent need for decontamination of the whole area as dangerous waste products from the illegal drug laboratory had seeped into wells of neighbouring compounds and poisoned their sources of water supply.

“This has a very serious implication because time will come when the effects of these chemicals will cause deadly health challenges like cancer, birth deformity and kidney problems among others.

“We call on the government to come to the rescue of residents of the area and to also appeal to the general public to come up with useful information whenever they notice or perceive strange activities or unusual odour within their environment.”

Those paraded gave their names as Christopher Eze, Ikechukwu Umahi and Paul Eze, even as the principal suspect, Christian Chibuzor, said to be residing in South Africa was yet to be apprehended.

Also, narrating his experience, a neighbour in the Phase 6 area of Trans- Ekulu, Mazi Ogunedo Emeruole said: “We started noticing changes in our well for over three weeks but before then, we did perceive strong smell from our neighbour’s compound.

“We were thinking then that the old tenant packed away and the new tenant fumigated the compound. It got to a point that we became worried because we began to perceive very strong smell every night and it wasn’t abetting.

READ ALSO  EKITI ELECTION: There are plans to implicate me and other PDP members with Murder Fayose cries out

“It got to a point when we noticed the presence of oily substances percolating on the water we fetch from our wells… They come with a very strong smell. So I called these mallams that used to excavate wells. The first person we called could not dig more than two feet; before coming out almost lifeless, so to speak. We had to pour water on him to revive him. We asked him to come back the next time but he refused, saying that the plumber could have poured some chemicals into the well, but we have never called any plumber here since 2008.

“Another set of mallams came later and one of the guys dug one foot and said he could not continue because the smell of the chemical inside the well was powerful. We now observed that the surroundings of the well had turned to black and anytime we fetched water, it was smelling and the odour made us sneeze continuously. It was then that I gave instruction to my family not to use the water again except for flushing of toilets.

“So we were surprised when the officials of NDLEA came around to inform us that our neighbour here is producing a very dangerous chemical. They mentioned the name, Meth, and I know I had read about meth in social media, a very powerful hard drug. We were all shocked; we never knew that a neighbour that just moved in three months back was producing such materials within our environment.”

Emeruole further said that the suspected drug dealer was not the owner of the property but rented it and was not known by neighbours.

“We don’t know him, the only thing is that we used to see an expensive Range Rover Sport vehicle that parks outside whenever he comes around. We used to say that we have a very rich neighbour within our vicinity. For the two times I saw the vehicle parked at the gate, he never came out. The engine continued running and he would be inside the vehicle, he never came out. We were told he lived overseas.”

It was gathered that some of the trees in the compound had already died while others had withered, even as the drug was said to be more costly than cocaine and the Africa production is rated highly in the international drug market.