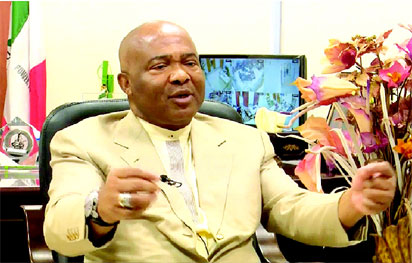 The Governor of Imo State, Sen. Hope Uzodinma has declared that Imo state will go into complete lockdown this tomorrow (Saturday) and has banned all public gatherings in efforts to prevent spread of coronavirus.

Governor Hope Uzodimma announced the ban in a broadcast, ordering all markets closed indefinitely and prohibiting all forms of marriage ceremonies, burials, gathering in places of worships.

The ban also extends to open evangelism and crusades. Boundaries into Imo will be barricaded and travellers into the state must be cleared by health officials at the checkpoints.

Civil and public servants in the state, except those on approved essential duties, are to stop work immediately. And a combined team of military, police and other security agencies will be deployed to ensure residents comply with the directives.

Uzodimma admitted the new measures would cause inconveniences or hardship but they were inevitable to fight against Covid-19.

The governor assured the people that the state was ready for any emergency as according to him, “a team of specialist doctors are now on ground and well equipped to handle any emergency just in case the virus finds its way into the state.”

Further measures announced by the governor to contain the virus include the training of health educators to go to the rural communities to educate them and the distribution of sanitizers to all the communities in the state.