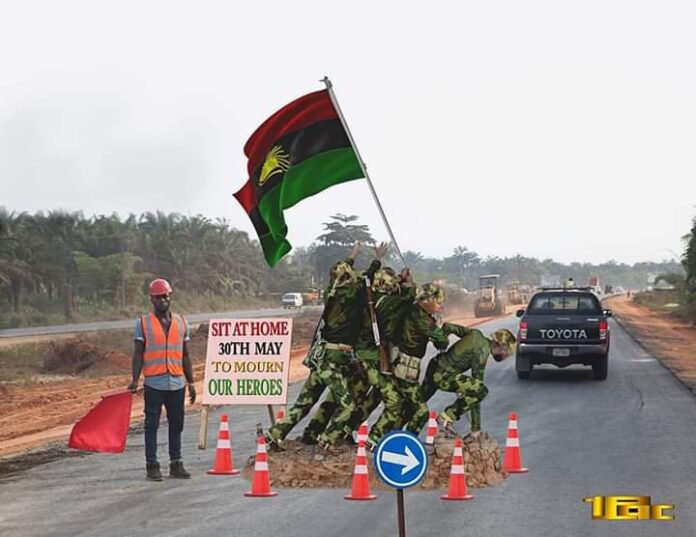 …As Police, Army beefs up security, forms alliance ahead of Biafra 30th May celebration

ENUGU— Security has been beefed up in the South East, and some parts of the South-South region – Asaba, Port Harcourt, the Delta and Rivers states’ capitals ahead of 30th May sit-at-home directive by the Indigenous People of Biafra, IPOB.

According to our impeccable source, the combined security forces of the Nigerian Army and Police have reached an agreement for joint security operations in IPOB strongholds even as residents are urged to go about their normal businesses without fear of intimidation or molestation.

This was against the backdrop of IPOB’s insistence that nothing would stop its members and the Biafran people from observing the sit-at-home order.

In Abia, for instance, it was gathered that the Army and Police authorities have said they would commence joint security operations in the state from Monday, May 27, in lieu of the sit-at-home order to forestall any violence and molestation of residents.

In preparation to forestall any major security threat, the military’s 14 Brigade, Ohafia, along with the police, has planned to carry out “Operation Show of Force” by Monday in Abia. The planned operation, according to an inside source in the army, was to assure the public that their safety will be guaranteed if they decide to go about their normal businesses on May 30.

Speaking on the development, the Abia state commissioner of police, Mr. Ene Okon corroborated the army in the state, saying they are going to have a joint police/military patrol, adding that the command earlier in the week arrested some members of a pro-Biafra group in the state capital for breach of public peace.

According to Okon, “as far as I’m concerned, IPOB remained a proscribed group and anybody who associated with it in the state will be treated as a terrorist.” He warned parents and guardians to caution their children and wards to refrain from any act that will cause a breach of the order enjoyed in the state.

However, an IPOB member in the state who does not wish his name to be on print, in a chat with our correspondent, said the military and police are just wasting their time, maintaining that there would be no going back on the sit-at-home directive.

But following the insistence of IPOB and the strength of their awareness creation which included hoisting of Biafran flags in some areas in Anambra state, including Awka, the state capital; police began a manhunt of members of the group. The State Command has confirmed the arrest of 12 members of the group around Asaba-Onitsha expressway while the other 12 were apprehended along Ekwulobia-Uga road in Aguata Local Government Area of the state.

It was also observed that a joint force of Police, Army and other security agencies were patrolling the nooks and crannies of the state to ensure that peace and tranquility reigned.

In Port Harcourt, the 6 Division of the Nigerian Army also declared its preparedness to assist the Nigeria Police Force to ensure that there is no breakdown of law and order in Rivers State on May 30.

Deputy Director, Army Public Relations, Colonel Aminu Iliyasu, in a chat with newsmen, said that Army’s responsibility is to assist the Police whenever the need arises. Iliyasu explained that the primary responsibility falls on the Police, adding that Army does not work alone, but in collaboration with sister security agencies in the state.

Also, the Delta State Police Command, yesterday expressed its readiness to checkmate activities of members of IPOB, imploring law-abiding citizens in Asaba and its environs to disregard the threats by the group, and go about their lawful duties.

It said strategic measures have been put in place by the command to ensure that any act of violence or lawlessness by any group is adequately addressed while the culprits will be made to face the full weight of the law.

In Ebonyi, the State Police Command said it has beefed up security in all the nooks and crannies of the state to forestall any possible breakdown of law and order. The Command added it is now working in collaboration with the Nigeria Security Civil Defense Corps, NSCDC and the Department of State Services in the state to conduct a show of strength movement round the state.

The police spokesperson in the state disclosed that about 100 Biafra flags hoisted by the members of the IPOB have been mopped up by the police, saying they would not relent in ensuring that the pro-Biafra group does not have a field day.

The NSCDC in the state, also confirmed it was working with other security agencies to ensure that lives and properties are protected.

It noted that it was adequately prepared and had the human and material resources needed to arrest any situation that may arise on the day of the sit-at-home order.