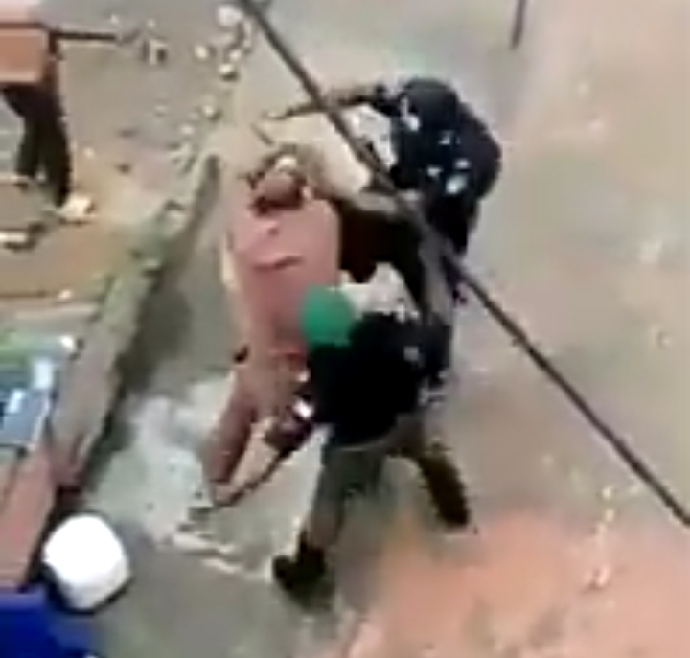 An Onitsha based lawyer by the name, O.J Obasi Esq., was reportedly assaulted by some men of the Nigeria police for simply intervening in the case of a citizen who was pummeled at the roadside.

In a video that was shared on the social media, the said lawyer was seen discussing with some policemen when one of them attacked him and started battering him mercilessly.

The policeman was joined by another colleague of his who also battered Mr. Obasi to the ground. It took the intervention of some persons, including a police officer who was on camouflage uniform to calm the situation.

According to a friend of the victim, Ifeanyi Agwuncha Esq., who also shared the video and called for justice of the victim, he was assaulted and viciously beaten for simply finding out what happened and to ameliorate the situation.

After confirming the story in the shared video, TheNigerialawyer (an online tabloid) put a call through to Mr. Ifeanyi Agwuncha Esq., to ascertain the veracity of the story, but he did not pick. Thereafter, the Chairman of NBA Onitsha branch, Ozoemena Erinne was contacted, but he also did not pick his call.

However, the victim, O.J. Obasi Esq., when contacted responded and confirmed the story to be true. According to him, his offence was simply intervening in the case of a young man whose right was violated.

“I then stated that if something is not done, the man may die, and that even if he committed any offence, the right thing to do is to take him to the police station. I was far from where the scene was, so I made a sign, and then two police officers looked at my direction. I then pleaded on behalf of the man that he should be taken to the police station. One of them then left the scene and walked up to me and asked what my interest was. I told him I have no interest, but that he should be taken to the police station because he may be incapacitated or seriously injured if the beating continues.

“I was then asked by the policeman who I was to intervene. I responded by telling him that I am no one, but I was simply pleading that the man be taken to the station. That was how the beating began.

“I wasn’t even aware someone was videoing the whole scene. I even declined to make comment. The boy they were beating came and kneeled down, begging them to leave me alone. I do not even know him. But I wondered how we can watch people who were supposed to be securing us turning around to beat us. That was my offence.

When asked if he has been contacted by the Police, he said that some numbers called him, which he suspected to be that of some policemen through the help of “true caller”. By then, I didn’t know there was a video. It was when I saw the video that I suspected why the calls came through. I currently do not pick their calls. The NBA Chairman of Onitsha and other members of the branch called me.

He also added that somebody attempted to video the initial incident, but ran away so that he will not be apprehended. He further said that one of the policemen pleaded with him not to take the matter up, and that he told him that God will take it up, not knowing that someone was videoing the whole scene.

As at the time of filing this report, the Nigeria Police was to yet to respond to the video or the allegation.

Watch the video of the beating below;